On February 22, 2020, Aesthetic Medicine Clinic Myroslava Novosilska was awarded “Life in ECO Style” Certificate, which certifies that the company uses environmentally friendly products, is socially responsible, and cares about its customers and the environment.

“LIFE IN ECO STYLE” project is an initiative of:
International Chamber of Commerce (ICC Ukraine), which was established in 1919 in Paris and actively implements world quality standards
National Tourist Organization of Ukraine; its mission is to promote an active and healthy lifestyle.
At the same time, the network of Aesthetic Medicine Clinic Myroslava Novosilska, taking care of the planet’s resources and ecosystem, became a partner of Totis Pharma. This means the correct and safe disposal of medical waste: needles, ampoules, vials, plastic parts of syringes. Such simple actions can prevent the formation of toxic air pollution during open combustion of used materials, as well as the spread of dangerous viruses (HIV, tuberculosis, viral hepatitis, etc.)

Dr. Myroslava Novosilska is the President of the Ukrainian Society of Hair Restoration Surgery (USHRS). This organization is a non-profit association of specialists in hair treatment and restoration in Ukraine and is aimed at the development of this area in our country.
Every year USHRS organizes an International Congress featuring outstanding speaker – leading experts in hair restoration. The event is attended by representatives of more than 10 countries, including Argentina, India, Germany, Spain, Georgia, Israel and others. Congress serves a platform for coordination
Of new partnerships, career advancement of specialists from Ukraine and exchange of knowledge and experience. 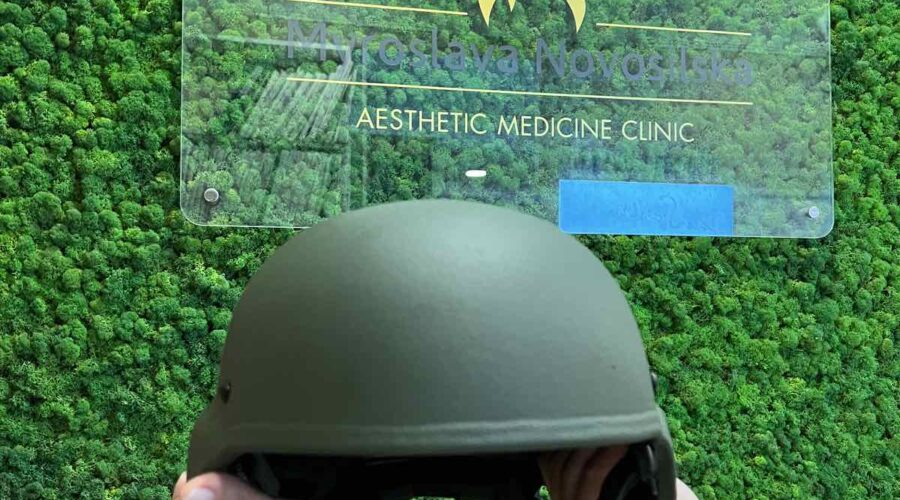 During the war, Myroslava Novosilska, the owner of a network of clinics, also decided not to stay away and help the Ukrainian army. The charity project initiated and run by Myroslava Novosilska Clinic is aimed not only at saving clients’ hair but also saving their lives ❤.

To this end, the Clinic has purchased 220 high-protection Kevlar helmets in France and Denmark to hand over to its patients defenders who have taken the military oath. Unfortunately, we can not provide all Ukrainian defenders with helmets, so we pass helmets directly into the hands of the Clinic patients who have joined the Armed Forces or other military formations in accordance with the law.

The cost of one helmet is from UAH 10,500 to UAH 14,600. If you are our patient who was mobilized during the armed aggression of the Russian Federation, contact the Clinic and you will be provided with head protection in due order.

Myroslava Novosilska is also active in the information frontline, maintaining constant contact with world doctors and the media, disseminating truthful information about the situation in Ukraine.

On the occasion of the Clinic’s 5th anniversary, more than 100 twin-Turks were sent to make coffee. One jezva was addressed to the clients and the same to the Ukrainian defender. Jezvs were called “coffee Bayraktars” – they were created by Turkish masters of the Aiy company.
These are professional copper utensils used by the best baristas in the world.

The handle is made of fire-hardened military grade carbon steel. Weapons are made from such steel, and the Trident is the Ukrainian national symbol of freedom, cut on the handle with the help of a laser.

Everything will be Ukraine 💛💙 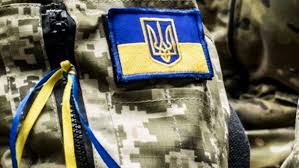 As part of the community service project “Scars of War” Dr. Myroslava Novosilska offers help to men who participated in the anti-terrorist operation and suffered as a result of terrorist acts in Ukraine. People with a large number of fresh wounds, which will later become scars, are offered services at the Aesthetic Medicine Clinic of Myroslava Novosilska free of charge subject on condition of prior appointment.

Treatment is carried out with the latest solutions used in aesthetic medicine. This project has been going on for three years, during this time significant results have been achieved. “I will supplement the treatment with a few more items in the treatment protocol, using the technologies that are presented at the Congress. I want children in the streets not to be afraid and not to point at men with scars on their faces, but to be proud of them and respect them for protecting us and our land.” – declared Myroslava Novosilska, PhD in Medical Sciences, Doctor of Aesthetic Medicine, Dermatologist-Oncologist, at the International Congress in Turkey, where she presented the unique results of her work with severe scars and scars over the past three years.

“Giving Beauty – We Help” is the slogan of a unique “Give Beauty” charity project implemented in the western regions of Ukraine.
Pursuing the project goal the Aesthetic Medicine Clinic Myroslava Novosilska takes care of more than 2100 elderly people living in geriatric boarding houses (nursing homes). Basic personal hygiene products (diapers, disposable bed sheets, toilet paper, shampoos, napkins, etc.) and food are supplied to hospices in the western regions of Ukraine at the expense of the clinic on a monthly basis.
At the same time, employees of Myroslava Novosilska’s clinic network visit one of the nursing homes on a monthly basis with an unusual mission: to give care to the hospice residents and give them the opportunity to feel young and beautiful again.
“My colleagues and I just do what we do best – giving women a sense of their own beauty. Let’s try to make these girls (and we all remain girls at heart, regardless of age) feel beautiful, feel our care, try things that, quite likely, they have never tried before. These things include facial massages, cosmetology care procedures, manicures, pedicures, hairdressing services, i.e. procedures that will lift the mood and self-confidence of any woman,” says Dr. Myroslava Novosilska, a well-known philanthropist and founder of the Aesthetic Medicine Clinic Myroslava Novosilska. 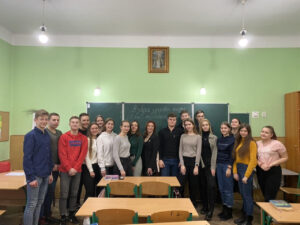 The “Healthy Skin ABC” program is fulfilled in cooperation with the Education Affairs Administration of the Department of Humanitarian Policy of the Lviv City Council and is aimed for secondary school students in Lviv, covering school children of grades 7-11. Dr. Myroslava Novosilska provides financial support for the implementation of this Program, namely the purchase of training skin care kits for school children.
Employees of the Clinic network actively participate in biology or valeology lessons telling facial care products to prevent skin diseases. Students are also told about a healthy diet, skin and hair care.
Dr. Myroslava Novosilska focuses the school children’s attention on the importance of reducing the use of decorative cosmetics. She also emphasizes the uniqueness and originality of each child and, thus, the fact that they shouldn’t copy the appearance of bloggers and celebrities. 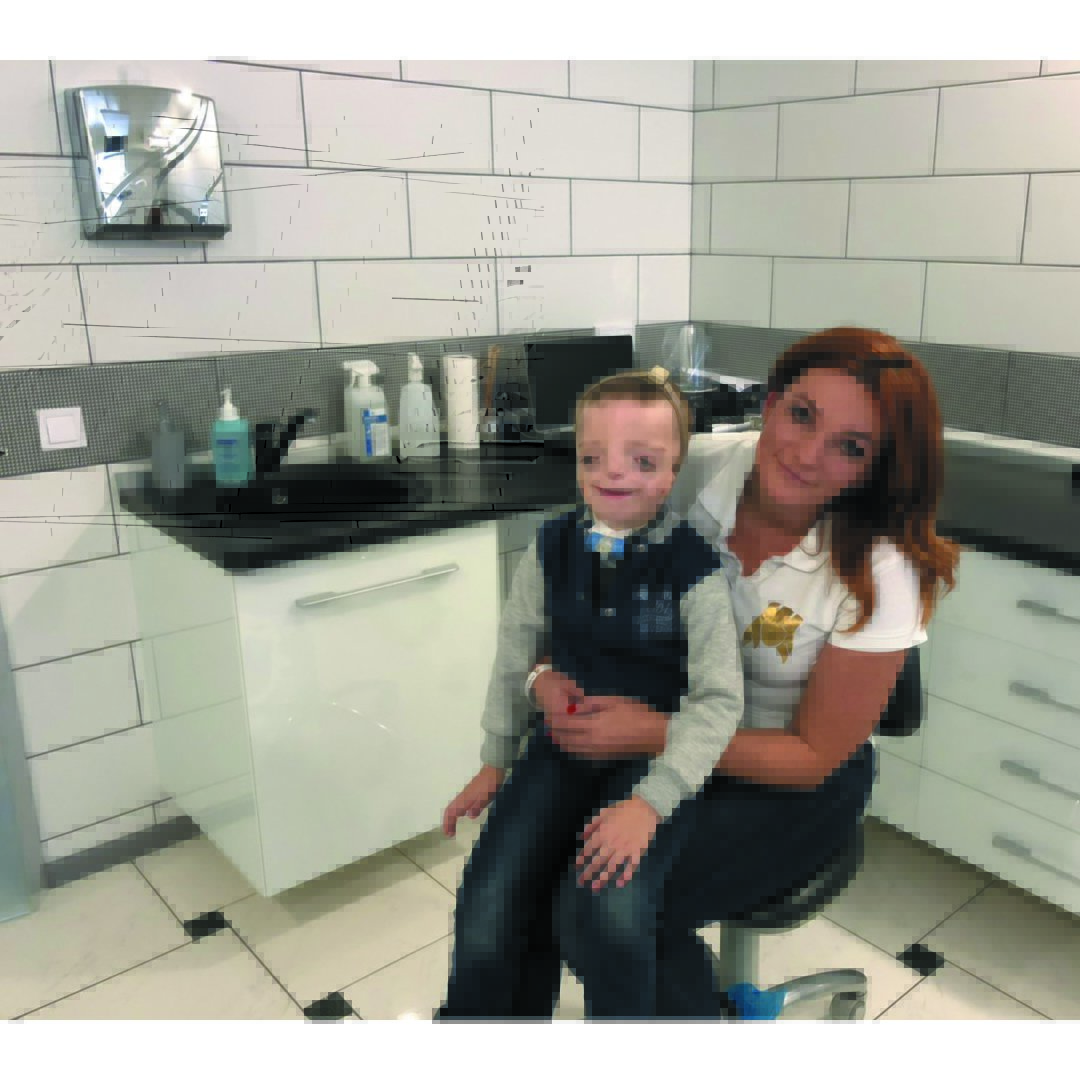 Meet Yaroslavchik. He is 7 years old. He has a rare Treacher Collins or Franceschetti syndrome. He is a special boy, smart, loving, gentle, and kind. He has a beautiful smile that lifts the spirits and gives strength to go further and fight for his life and well-being in society.
Yaroslavchik’s underwent his first operation on the 5th day after his birth, the second – in three weeks, and the third one – in two months…. (There were 12 surgeries in total including many anesthetics). About 30 surgeries are still needed. Some facts about the syndrome.

Treacher Collins or Franceschetti syndrome is caused by a genetic disorder that occurs in one newborn out of 10,000. In half of the cases, the nature of the disease is hereditary, mysterious and severe, leading to the birth of children with severe abnormalities.
Yaroslavchik has an underdeveloped jaw, narrowing of the oropharynx and trachea, which does not allow him to breathe and eat properly (food should be of a water-like liquid structure, if a little thicker he is choked and refuses to eat), he has no outer ears and can hear only due to a Baha system hearing aid, it has a form of a headband which Yaroslavchik is wearing.
Now Yaroslavchik breathes through a tube that is placed in the trachea, because of this he constantly endures painful manipulations.
Yaroslavchik underwent lower jaw lengthening surgery and three choana surgeries in Israel.
We form a team of specialists from all over the world to reduce the number of anesthetics and perform quality operations. We will be glad to involve professionals from the sphere in this charity project.