Many people sooner or later face the problem of hair loss and thinning. The reason for reducing the amount of hair can be stress, poor nutrition, or a genetic predisposition. Alopecia is a common problem, but now you can deal with it without fear and with benefits for yourself thanks to the Milta Head procedure.

Milta Head is a hardware medical procedure that aims to cure baldness, improve the condition and density of hair. It does not belong to the category of minimally invasive, so it is painless and not harmful to your health. Who will need the procedure, and what its frank advantages are, we will tell you later.

How does MILTA HEAD work?

MILTA HEAD is an innovative hair treatment that helps to increase the density and improve the condition of the hairline by activating the metabolism of hair follicle cells. The operation of the device is based on the technology of low-intensity laser radiation. During its operation, the patient is affected by three factors at once: magnetic waves, pulsed infrared radiation from a laser source, and constant radiation from an LED source in the same infrared range.

The device works on the principle of laser phototherapy. Its unique technology consists in combining the synergistic effect of radiation (visible spectrum, infrared radiation, soft laser and magnetic field) and its diffusion (up to 13 cm). Thanks to this, laser radiation acts on the hair follicle in this way: it releases additional energy, which creates conditions for the growth of new hairs. 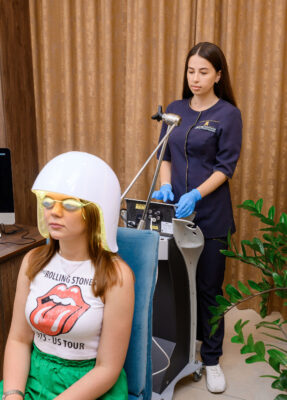 Low-intensity laser beams penetrate the layer of the epidermis and stimulate blood circulation in the scalp. Increased blood circulation, in turn, increases the flow of vitamins, minerals, oxygen and other useful substances to the hair follicles, stimulating their work. The energy of laser radiation is easily converted into biological energy and participates in protein synthesis. Each of our hairs consists of 90% of the latter. Hence the building material for hair restoration.

The overall effect of using the technology is as follows:

Hair after a course of procedures becomes thick and pleasant to the touch. It no longer breaks, excessive porosity disappears. In areas damaged by alopecia, new hair grows over time, and the hairs that were there become longer, their life cycle does not end ahead of time. The scalp also changes – it looks well-groomed and clean, the feeling of heaviness disappears.

Who is recommended to use the technology and when?

The innovative MILTA HEAD procedure is indicated for use in cases of alopecia:

In addition, this procedure is useful during the postoperative period, after childbirth, serious diseases, as well as for general strengthening of hair and improving its structure. It can be used not only for treatment, but also for prevention.

The therapeutic effect of MILTA HEAD is manifested in: 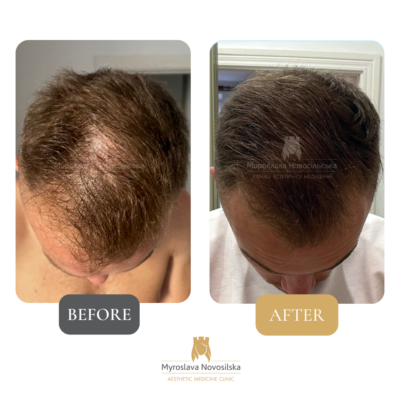 This procedure is suitable for all hair types of women or men. The results of using MILTA HEAD are noticeable after a month of treatment. Hair after a course of procedures will become noticeably thicker, more voluminous and shiny.

The latest technique has no contraindications. They can only be serious diseases caused by the appearance of tumors, as well as pregnancy. It is worth noting that the procedure itself is absolutely painless and has no side effect.

When and how else can MILTA HEAD be useful?

A modern device can not only improve the structure of hair and stop its loss. Procedures using it are also indicated during hair transplantation. During a complex hair transplant operation, MILTA HEAD plays an important role in preserving the donor area, improving the quality of grafts, accelerating healing, and reducing redness and irritation on the scalp. It also accelerates hair regrowth.

Hardware technology can be used both before and after transplantation. Its use before the operation is required to prepare the areas where the transplant will be performed. After surgery, laser radiation will accelerate the healing of injured areas and additionally stimulate rapid hair regrowth.

MILTA HEAD also has a positive effect on neuro-emotional balance. It serves as a means for psychoemotional balance. The device restores the balance of the parasympathetic and sympathetic nervous systems, in turn ensuring the proper functioning of the autonomic nervous system. The importance of MILTA HEAD is to balance all brain neurotransmitters and bring all emotions into the right state.

It is advisable to use the device for:

What are the features and advantages of the device?

The MILTA HEAD hardware technique has no analogues. The speed of its impact is explained not only by the latest technology, but also by the features of the device itself.

What is special has such a device?:

The device has a radiation area of 935 square centimeters, which is provided by the use of 424 laser medical diodes. Our employees are familiarized in detail with the principle of operation of the device and its settings. They will make sure that the procedure brings you an excellent result and a good mood.

The MILTA HEAD device can be used in all industries where infrared laser or led radiation is shown. Thanks to the adjustment of their power, this method of treatment is the most versatile. In addition, it is Matrix emitters with multiple radiation sources that are recognized as the most efficient today.

Our Clinic pays special attention to treatment with MILTA HEAD, because this method really works, especially in combination with others. Its results will be much better if, in addition to treating existing baldness, it is possible to establish and eliminate its cause.